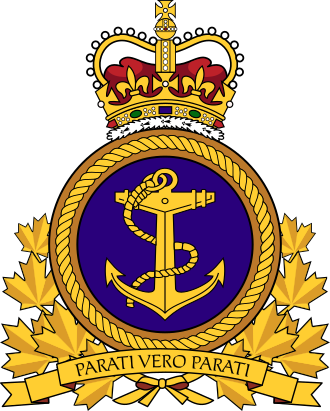 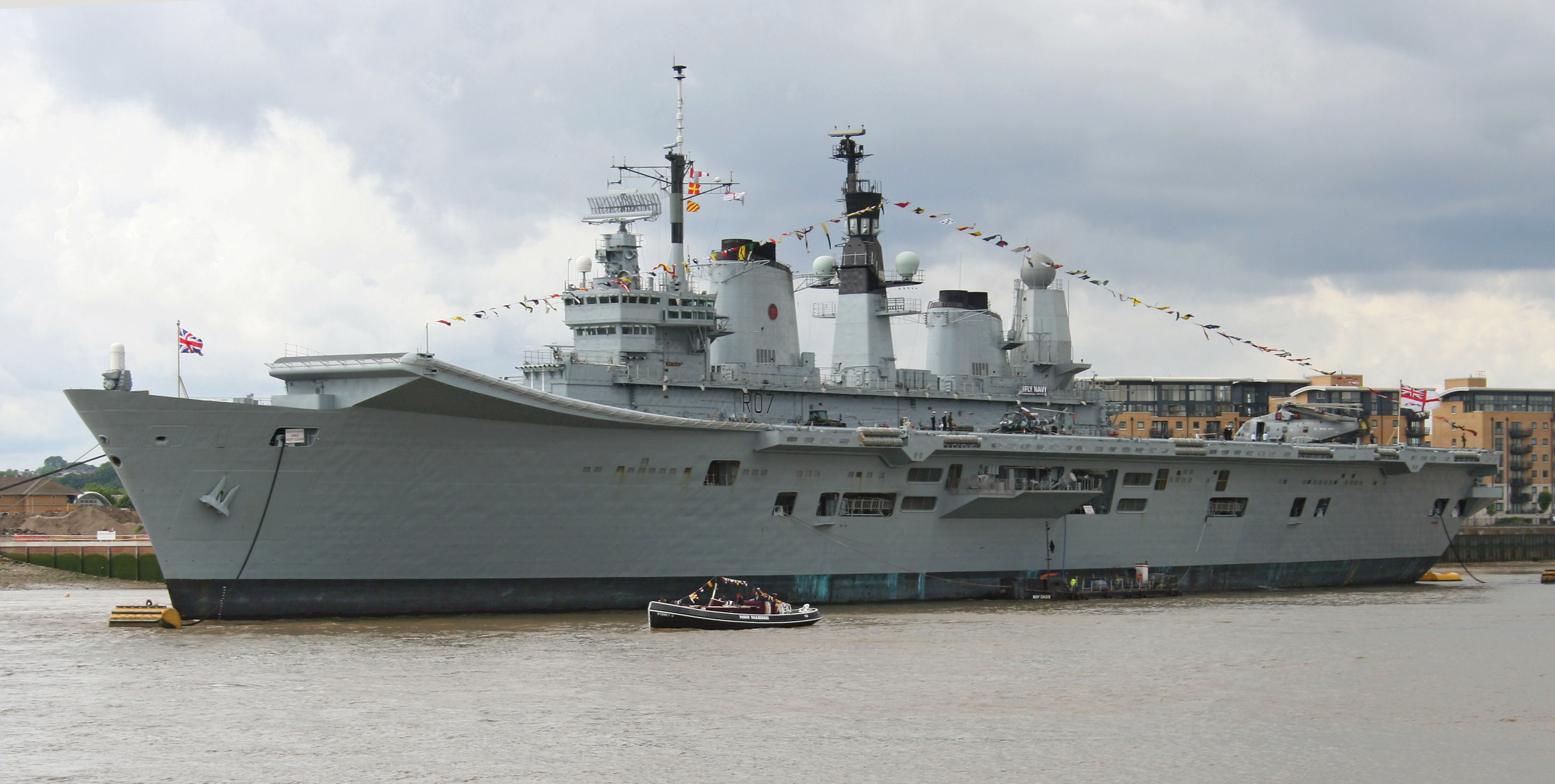 The Carrier Strike Group had completed it's preparations. Sailors and marines had said good bye to their families and stores and weapons were loaded aboard the vessels of the group. The tanker carrier stories and supplies to resupply the fleet in the Caribbean and facilitate a long period at sea.

With skill and precision the warships left their berths at Nova Scotia. The grey hulks slipped out into the Atlantic mist. The crew standing on the side of the vessels as it departs, it was their final glimpse of the bitter cold backdrop of Canada. The vessels will follow the following path to the Caribbean ; FN>FM>FL. Most of the aircraft onboard Magnificent are safely stored below deck in the hanger, 2 Harrier GR9s with 4 x AIM-9 sidewinders are tightly secured behind the deck tower, ready to launch as a quick reaction force.

The Naval force sail in a circle. The carrier and supply ship in the middle with the frigates and destroy positioned as a outer ring. HMCS Iroquois at the head of the convoy, HMCS Halifax on the left and HMCS Ville De Quebec on the right. They will arrive in (OOC 3 hours) time. 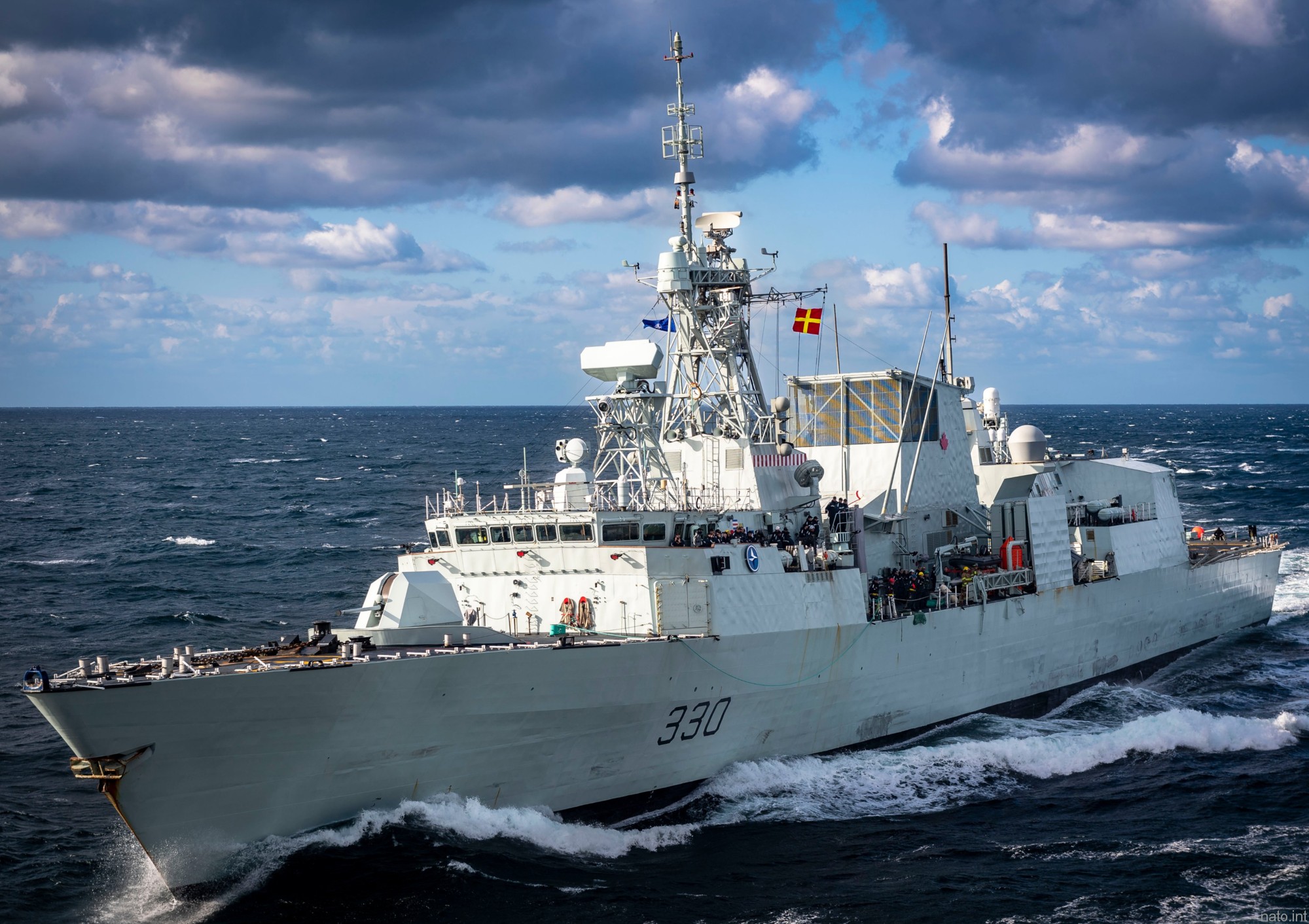 The fleet crossed into the Carribean Sea, entering via the channel between Haiti and Jamaica. Onboard, sailors and marines would be permitted to host an afternoon ship's BBQ to allow for team building. A impromptu football game is held between the marines and sailors. The evening topped off by a dry bar. The entire flight deck now permitted to be used as a sunbathing platform

A watch team would continue to monitor the air and sea space around the fleet for dangers. Harrier GR9s position to respond if necessary . The first deployment of Canadian warships into the Carribean for many years, and the first operational deployment of a Canadian Carrier Strike Group in decades.

The fleet has just left the channel of Haiti and Jamaica when a urgent order came through, to assist and support the Haitian response to the earthquake that had just decimated the country. The crews onboard the vessels had felt the shockwave travelling through the sea. It was decided that Marines would be flown onboard from the carrier, to secure and hold the Aeroport International Toussaint Louverture, assess the suitability of the runway and hopefully allow for relief, extra forces and supplies to be flown in.

The ship was brought to flying stations as the marines begun to arm themselves with their weapons, equipment and body armour from the armoury. Machine guns and miniguns are attached to either side of the CH-146 Griffons and machine guns to one of the sea king helicopters

A Platoon of 36 Marines were the first to leave the carrier onboard the 4 CH-146 Griffons of the Special Operations Aviation Squadron. The marines have departed for the short flight to the island. An additional Sea King helicopter will fly with the fleet to provide reconnaissance of the island.

In Canada, HMCS Intrepid and HMCS Toronto (FFG333) have been prepared for a crash deployment South to Haiti.

HMCS Intrepid will carry the following;

They will arrive in 3 hours.

The 4 Griffons of Special Operations Aviation Squadron swoop into the horizon of the airport. With skill and precision, the 4 helicopters come to a graceful landing on the airport runway before the soldiers jump out into defensive positions around the perimeter of the aircraft. The unit officer looks around quickly at the airport, the terminal building and ATC tower were collapsed however, the runway it's self seemed undamaged. The 4 griffons take off back towards the ship to ferry back and for the remainder of the units. Within 30 minutes, the entirety of 'D' Company, 3rd Battalion, Marine Commando Regiment were on the ground in Haiti. 1 and 2 platoons begin patrolling the airport perimeter whilst 3 platoon begin to clear the rubble from the runway

Several hours later, the HMCS Intrepid and HMCS Toronto arrive on station off the coast of Haiti. Intrepid joins the carrier group whilst Toronto refuels at the supply ship before following the same route back (again taking 3 hours). The fleet move to position themselves 25km west of Gonave Island. Onboard the deck of Intrepid, the CH-53E Super stallion whirls it's rotor into life as 55 engineers from 61 Engineering Field Squadron board the aircraft. The remaining 5 engineers board a waiting Griffon behind the Super Stallion, the 2 helicopters take off and head towards the airport.

In the welldeck, marines and sailors begin to load up their vehicles and equipment onto the awaiting Chaland de transport de matériel. A Company , 1st Battalion, 1st Marine Commando Regiment's 124 marines will be the first to depart the well deck on 4 landing craft, 4 BV206s will also be on the landing craft with them. Featuring an armed machine gun, these will be the first vehicles to land on Haiti.

The chosen beach to land is west of the town of Menelas. 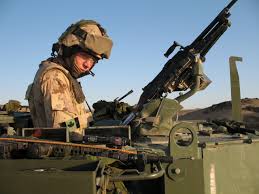 At the airport, the aircraft touch down. Engineers dismount and get to work on ensuring the runway, taxiways and buildings are structually safe as well as erecting a large perimeter fence using HESCO barriers, the Super Stallion returns to Intrepid to pick up the equipment needed using underslung transport.

A Company climb into their BV206s which are mounted on the landing craft. The door of HMCS Intrepid's vast well deck is now swung widely open. The landing craft depart one by one, moving from the shaded welldeck of the ship to the blazing Caribbean sun. It would take 30 minutes for the landing craft to reach the beaches. The landing craft stop just off the shoreline, before dropping the front ramps. Leaving the Amphibious BV206s to swim the rest of the way to land. The 124 Marines fan out across the beach, securing the perimeter for the rest of the force. Drivers and gunners remain in the BV 206s, giving them a vantage point to observe any possible threats. A crowd of Haitians begins to grow around the marines, desperately begging for food.

The landing cross leave to begin regularly ferry trips for the rest of the landing force and the vehicles. From the Field Platoon, Transport Company, 9 Marine Service Battalion 20 HLVW Heavy Logistic Vehicle Wheeled driving by a total of 20 Marines are loaded up with the supplies. They will be ferried alongside the remainder of the marines.

The transfer from ship to shore was now completed. Marines boarded onto the vehicles as they made the short trip to Toussaint Louverture International Airport in Port-au-prince. Upon their arrival, the forces begin to assembly a main operating base. The main terminal is converted into barracks with a field hospital set up in between. A day would be spent achieving this. Doctors, Nurses and Allied Healthcare Professionals begin to operate the hospital. The 124 Troops from B Company, 1st Battalion, 1st Marine Commando Regiment have been given the mission of airbase force protection, using their BV206s, 1 platoon will be patrolling the now established hesco barrier fence line whilst a second platoon guards the guard towers and the final platoon rests. They will work in 6 hour shifts at each station.

Inside the base, 65 support squadrons, resource troop get to work creating both vehicle and aircraft fuel stations, a canteen for marines and sailors as well as a safe armoury on base.

In Canada, the remainder of the marines is flown in. 124 Troops from 'C' Company and 159 troops from Battalion HQ Company are flown in using 12 C-130E Hercules from 436 Transport Squadron based in CFB Trenton. Regular ferry flights will be conducted, the planes will launch from CFB Trenton, refuel at CFB Shearwater before skirting down international airspace just east of the USA before arriving in Haiti.

At the National Palace, the helicopters sweep in as marines quickly disembark. Quickly the platoon establish a perimeter as the helicopters take off, pummeling the area with dust. The Platoon's Lieutenant looks around for a senior Haitian police leader as his soldiers secure defensive positions.

The Lieutenant finds two Haitian police officers smoking cigarettes as fire fighters continue to dig away at the rubble.

The Haitians look back at the young officer.

"Dead..go away" The police officers returned to their cigarettes "We have no wages"

The officer returns back to his men, up and down the street men, children and women forage through the ruined buildings looking to find luxury items to take away. Ununiformed men patrolled the streets in pickup trucks. He quickly radioed back his findings back to his base.

At the Parliament, the same events unfolded as bodies we pulled out of the rubble. Masked men looked on from the tops of pickup trucks. Haitian society had completely collapsed under the strain of the earthquake.

Across the island, Griffon and Super stallion helicopters had begun the process of dropping off supplies at various remote towns, villages and communes. The helicopters making a procedure to sweep in fast, hove, drop the supplies and fly back as quickly as possible to fit in more flights.

Across Haiti, Canadian helicopters were now delivering vital supplies into remote villages and towns. Vital medical supplies were being delivered whilst critically and severely ill casualties were brought to the bases medical centre for treatment. 2 Griffons manned by 2 pilots, 2 gunners, a doctor and a paramedic were dedicated to the role of casualty retrieval.

Reinforcements had now arrived in full at the airport. The troops would be quick to disembark from the aircraft before taking up a period of acclimatisation within the makeshift barracks. Engineers had now begun to move on to erecting tents to act as sleeping quarters for the now rapidly increasing number of forces.

The Haitian government had issued a urgent support request. It's aid workers were totally unable to enter the area of Port-Au-Prince known as cite Soleil. Aid convoys reported being harrassed by armed men upon attempting to enter the area, or aid being stolen. Commander Charles Webber of the 3rd Maritime Brigade had authorised the deployment of 124 Troops and 14 BV206S's from A Company, 1st Battalion, 1st Marine Commando Regiment to escort in the relief supplies. They will be joined by a contingent of a doctor, nurse and 2 paramedics.

A additional 4 C-130 flights with 16 troops from mobility troop, A Squadron, JTF2 has left CFB trenton. Onboard the 4 aircraft are the 16 soldiers, 1 HMMV SOV and 3 Land Rover WMIKs.

As the convoy approached Port-Au-Prince, the marines checked and loaded their weapons ready for a possible confrontation. The area of Cité Soleil was Haitis poorest area, gripped into the clutches of drugs and organised crimes. Government officials had declared this area a no go area.

The convoy halts on the outskirts of the area, parked up on route 9. The mounted gunners on the wagons scan for threats as the infantry units dismount. As the men begun to dismount, armed masked men could be spotted appearing on the rooftops. The Marines run for cover, breaking off into platoons to secure a wide width of the road.

1 Platoon made the first move, securing the local park just off of route 9. As they begun to settle down, a single gunshot could be heard whizzing past them. They held firm, but it was clearly meant to be a warning not to come further.

The marines continued forward, 2 and 3 platoons begun the walk towards the major hospital in the area. Their BV206s's following them behind.

At the airport, the 4 flights containing the JTF2 detachment had now arrived in country.
You must log in or register to reply here.
Share:
Link
Top